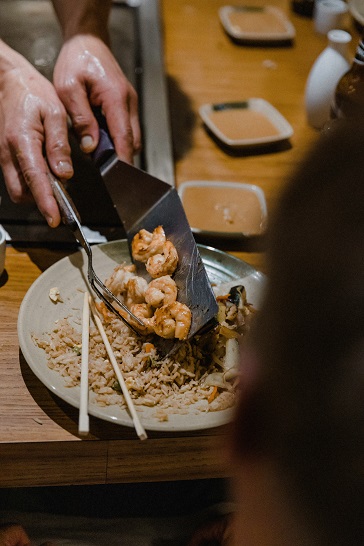 Japanese cuisine is one of the most popular types of food in the world. It’s also considered to be one of the healthiest, with a focus on fresh ingredients and healthy dishes. It’s no wonder then that Japan is the country with the highest rate of centenarians or people that are 100 years old or more. Along with lifestyle and a balanced approach to health and happiness, their unique diet may also hold the secret to living a long and healthy life.

What is Japanese food?

The traditional cuisine of Japan is based on rice with miso soup and other dishes, with an emphasis on fresh and seasonal ingredients. Japan is also divided into distinct geographic regions, each of which has developed its own unique culinary traditions. As a result, travelers can encounter a diverse set of foods as they move from area to area and experience an abundance of gastronomical delights with boundless variety. Japanese food is famous for its use of soy sauce, miso paste, and teriyaki sauce as well as its use of rice. However, there are many different types of Japanese cuisine. You may have heard of sushi and tempura, but what about natto or onigiri? Japanese food is known for its healthy and light flavors and the use of fresh or fermented local ingredients. For example, traditional dishes such as sushi are made with vinegared rice or are served with pickled plums called “umeboshi.” The cuisine has been influenced by the country’s traditional Buddhist, Shinto, and Confucian values, as well as by other Asian and now international cultures. For example, did you know that tempura was actually brought to Japan by 16th-century Portuguese explorers?

What are some popular Japanese foods?

Sushi is one of the first foods that come to mind when we think about Japanese cuisine. This delicacy was one of the first Japanese dishes to be exported to the US after the Meiji Restoration in 1868, and since then its popularity has steadily increased year after year. The word ‘sushi’ translates to vinegar rice, which is the base of this popular food. Common varieties of sushi include makizushi (the very popular sushi rice and fillings rolled up in nori seaweed), nigiri (shaped, bite-size mounds of sushi rice with single slices of raw fish draped over the top), and futomaki (a traditional thick and fat sushi roll typically filled with vegetables and sometimes include cooked fish like unagi). Sushi is made to be enjoyed with chopsticks or it is also perfectly acceptable and encouraged to eat with clean hands.

Sashimi is raw fish that has been expertly cut into thin slices and typically comes served with pickled ginger, wasabi, and soy sauce. Sashimi differs from sushi in that all sushi is made with vinegared rice and does not always contain raw fish, while sashimi is almost exclusively raw fish and is never served with rice. The fish used to make sashimi must be as fresh as possible. Popular types of sashimi are maguro (tuna), sake (salmon), hamachi (yellowtail), mackerel (saba), tamago (egg), among many others.

Tempura is a traditional Japanese dish consisting of vegetables and seafood lightly battered and quickly deep-fried. Some ingredients you may find in a tempura dish are shrimp and vegetables like green beans, onion, radish, and sweet potato. It originated in Japan during the 17th century when deep-frying became popular due to its convenience over pan-frying which required more time to cook meat properly. Deep frying allows for quicker cooking times while still ensuring a light, crispy, and tasty result every time. Tempura can be eaten by itself or served on top of rice bowls or noodle soups.

Udon noodles are perhaps the most popular noodles in Japan. They are thick, chewy, and traditionally made from wheat flour. They have a great texture to them, making them perfect to be served in a number of different ways (mixed into stir-fries, added to hot pots, served cold with a soup base on the side for dipping), but are most commonly used in noodle soups, where they are served in a savory soup broth with different garnishes.

Tofu may mainly be thought of in Western countries as healthy food or a vegetarian alternative, but in Southeast Asian countries like Japan, tofu (particularly silken tofu) is enjoyed by everybody and is a standard part of the traditional diet. Tofu is soy milk that has been coagulated, with the resulting curds being pressed into blocks. These blocks come in differing levels of firmness and can be eaten uncooked and topped with savory garnishes (katsuobushi, soy sauce, grated fresh ginger, and scallions), boiled in hot pots, or lightly fried and served with a dipping sauce in dishes such as agedashi tofu.

In a nutshell, Japanese cuisine is distinctive. It’s a mixture of different styles and ingredients, with some dishes being modern fusions while others are purely traditional. In addition to that, the healthiness of Japanese food is often emphasized—you can find many vegetarian options on menus in Japan (including at McDonald’s).

Kampai Japanese Steakhouse is the first Japanese restaurant in the Southern Tier and the oldest operating in Upstate New York. It was opened in 1975 by Richard Matsushima from Himeji, Japan. It remains a Japanese family-run business today, as it is now passed down to his two sons.

Kampai is known for having “Three Restaurants Under One Roof” – sushi, hibachi, and traditional. They are known for offering the area’s most authentic sushi and sashimi. Each piece of sushi is made to order, using the freshest fish and the highest quality ingredients. Grab a seat at the sushi bar and enjoy service directly from their chefs, or order sushi right to your hibachi or traditional table.

They also offer their famous hibachi-style dining. Food, fire, and flying shrimp – it has all the ingredients for a memorable meal. Whether you’re celebrating a special occasion or just having a fun night out, their chefs will entertain you as they cook your meal right before your eyes.

For a quieter experience, you can also try their traditional dining room with private tables. Discover authentic Japanese dishes like tempura, udon, and beef negimaki.

All entrees are served with steamed white rice and choice of miso soup or onion soup. Fried rice substitution 4.50

Beef Negimaki Dinner 26.50
thin strips of tender ribeye steak (with some fat to preserve the Japanese tradition) wrapped around scallions and grilled to perfection. Served with a light teriyaki sauce and mixed vegetables.

shrimp and a variety of vegetables lightly battered and fried, served with tempura sauce

Yaki Niku 27.50
thin slices of ribeye steak sauteed with onions, carrots, and scallions in a sweet and spicy sauce

Tempura Udon 17.50
Hot broth with udon noodles and shiitake mushrooms, served with a side of tempura shrimp and vegetables

Tempura Soba 17.50
hot broth with soba noodles and shiitake mushrooms, served with a side of tempura shrimp and vegetables

Yaki Soba 14.50
soba noodles and sauteed vegetables in a sweet and savory sauce

CHILDREN’S MENU  12 AND UNDER

All entrees are served with onion soup. Choice of white rice or french fries and steamed broccoli or mandarin oranges.